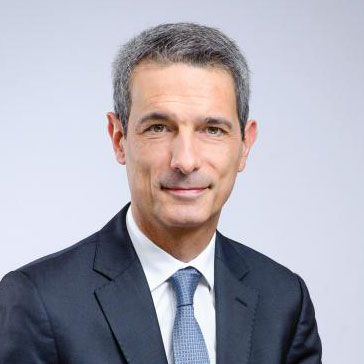 Chief Operating Officer of Saint-Gobain, Chair of the Strategy and CSR Committee and member of Appointments and Corporate Governance Committee

Outside the VINCI Group in listed companies
Appointments and other positions held at 31/12/2021
Chief Executive Officer of Saint-Gobain.

Background
Benoit Bazin is a graduate of the École Polytechnique and the École des Ponts ParisTech, with a degree in economics from the Institut d’Études Politiques de Paris. He also holds a Master of Science from the Massachusetts Institute of Technology. He began his career with the French Ministry for the Economy and Finance in 1995 as rapporteur to the Interministerial Committee on Industrial Restructuring, before moving to the Treasury Department, where he was responsible for French government investments in the aeronautics, electronics and defence industries.
Mr Bazin joined Saint-Gobain in 1999 as Corporate Planning Director for the Abrasives business, before being named Vice-President, Corporate Planning for Compagnie de Saint-Gobain in September of the following year. In 2002, he was appointed President of the North America and Worldwide Bonded Abrasives divisions of the Abrasives business. He was named Chief Financial Officer of Compagnie de Saint-Gobain in 2005. From 2009 until the end of 2015, Mr Bazin was President of the company’s Building Distribution sector and he has been a Senior Vice-President of Compagnie de Saint-Gobain since 2010. From 2016 until 2021, he served as President of the Construction Products Sector. Mr Bazin was appointed Chief Operating Officer of Saint-Gobain on 1 January 2019, before being named Chief Executive Officer on 1 July 2021.