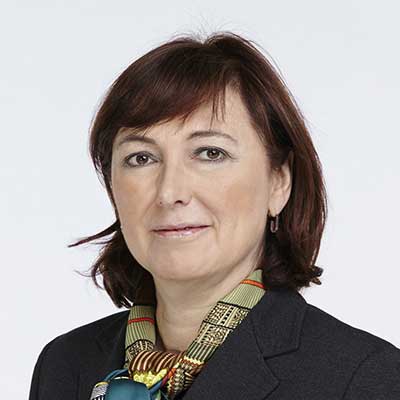 Chairman of the Executive Board, Geodis SA; Chair of the Remuneration Committee and member of the Appointments and Corporate Governance Committee

In unlisted companies or other structures
Appointments and other positions held at 31/12/2021
- Chairman of the Executive Board of Geodis SA
- Director of TLF.

Background
A graduate of the Essec business school, Marie-Christine Lombard held various positions in the banking sector early in her career, notably with Chemical Bank and Paribas, based successively in New York, Paris and Lyon. She subsequently moved to the express services sector, joining the French company Jet Services as Chief Financial Officer in 1993, before being appointed Chief Executive Officer in 1997, a position she held until TNT acquired the company in 1999. Mrs Lombard then became Chairman of TNT Express France, which she soon made one of TNT’s most successful business units. In 2004, she was named Managing Director of TNT’s Express division.When TNT Express became an independent listed company in May 2011, Ms Lombard was named its Chief Executive Officer. In October 2012, she joined Geodis, first as Chief Executive Officer, before being named Chairman of the Executive Board in December 2013. She was also a member of the Supervisory Board of BPCE and a member of the Board of Directors of the École Polytechnique until 2018.