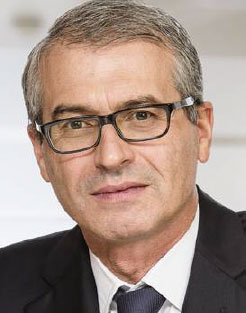 Outside the VINCI Group in listed companies
Appointments and other positions held at 31/12/2021
- Non-executive Chairman of Petrofac Ltd.
- Director of Newmont Mining Corporation

In unlisted companies or other structures
Appointments and other positions held at 31/12/2021
Chairman of Puma Energy.

Appointments and other positions that have expired during the last five financial years
Permanent representative of Anglo American plc on the Board of Directors of De Beers.

Background
René Medori has a doctorate in management and a DEA (diploma of advanced studies) in organisational science from Université Paris Dauphine. He also completed the Financial Management Program at the Stanford Graduate School of Business. After a four-year stint, beginning in 1982, as a consultant with Andersen Worldwide SC, he worked for Schlumberger from 1986 to 1987 as a financial controller in the Gas Meter division. In 1988, he joined BOC, where he held several positions in the United Kingdom, the United States and France, including that of Group Finance Director. He was also a member of BOC’s Board of Directors from 2000 to 2005. From 2005 to 2017, he was Chief Financial Officer and a member of the Board of Directors of Anglo American plc.