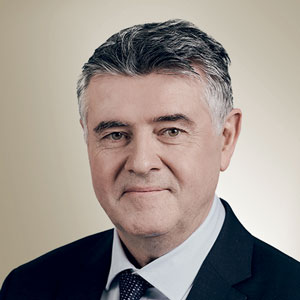 General Counsel, VINCI, Secretary to the Board of Directors

Born in 1957, Patrick Richard is a graduate of Université de Paris I (postgraduate diploma in European law), the Paris Institut d’Administration des Entreprises (IAE) and the Paris Institut Supérieur d’Interprétariat et de Traduction. After working as a conference interpreter, he joined the legal department of Dragages et Travaux Publics in 1983, before moving to the legal department of Vallourec in 1986. Patrick Richard was appointed general counsel of Degrémont in 1991, of Dumez in 1993, of GTM in 1996 and then of the VINCI Group in 2001. In addition, since 2006, he has served as secretary to VINCI’s Board of Directors.