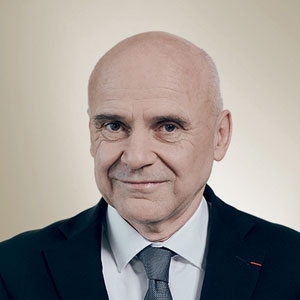 Christophe Pélissié du Rausas was born in 1958. He holds degrees from Ecole Polytechnique and Ecole Nationale des Ponts et Chaussées, and a postgraduate degree in Finance from Université Paris-Dauphine.
He started his career at the Ministère de l’Equipement (now the French Ministry of Ecology) then moved to the Spie Batignolles group where he worked in several management positions at Spie Enertrans.
He joined the VINCI Group in 1997 as Director of Concessions at Campenon Bernard (1997-1998), Executive Vice-President of Campenon Bernard, which later became VINCI Construction Grands Projets (1999-2001), and Managing Director of VINCI Energies Nord (2002-2003). He moved to VINCI Concessions in 2004, where he served as Deputy Director for Southeast Europe (2004-2009) then as Director of Client-side Project Management and Chairman of VINCI Railways. In that capacity, he was appointed Chairman of AGIFI (the French Association of Independent Rail Infrastructure Managers) from its inception in 2014 until 2017.
He has been VINCI’s Director of Business Development since March 2017.