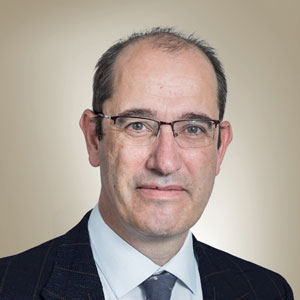 José María Castillo Lacabex, born in 1971 and holder of an industrial engineering diploma awarded in 1997, joined the Spanish concessions and construction group ACS in 2001 and has spent most of his career working in various positions in a number of different ACS subsidiaries. In 2009 he was appointed Managing Director of IMESAPI, before taking the same role at CYMY/MASA in 2014. In 2015, José María Castillo Lacabex was appointed Director General of Cobra Gestión de infraestructuras before becoming CEO of the Cobra group in 2016 and subsequently the ACS Industrial Services division in 2019. In 2020, while retaining his functions in ACS IS, he was appointed Chairman-CEO of Dragados S.A. In January 2022, following the takeover of Cobra IS by VINCI, José María Castillo Lacabex became a member of the Executive Committee.