Rising to the challenge of transport, housing and urban infrastructure

Ninety percent of the new lines will be underground, which means that most of the work to extend the region’s public transport network has to be carried out underground. The Grand Paris Express project therefore poses a number of logistical challenges, such as operating up to 20 tunnel boring machines underground at the same time. VINCI Construction's extensive expertise in this field enables it to play a leading role in the project.

Under another large project, the La Défense–CNIT station and adjacent tunnels are being built as part of work to extend RER Line E to include stops west of the capital. The project has seen 700 workers put 4 million hours into building a cathedral-like station while supporting existing structures and keeping the site in operation. Offices, shops and the hotel in the CNIT building – located right in the centre of the La Défense business district – have remained open throughout the work, which is a remarkable feat.

The nature of the work, the immediate environment and tight deadlines present other challenges. VINCI Construction is building all of the platforms for the southern section of the extended Line 14, connecting Orly airport to the centre of Paris. Large numbers of people are expected to take Line 14 during the sport event, which is why 13.4 km of double track will be built in a 12-month period. This is quite a tight time frame, particularly when the work is being carried out in a built-up urban area, limiting the shafts used to bring materials to the work areas as well as the above-ground storage capacity. In order to stay on schedule, the rail project has to overlap with the end of the civil engineering work and the start of the tunnel and station fit-out.

90%
of the new Grand Paris Express lines
will be underground

250,000
housing units built near the Grand Paris Express between now and 2030

The new metro lines have boosted the construction of new-build housing in areas that were once seen as remote. Société du Grand Paris estimates that 250,000 new housing units will be built near the Grand Paris Express between now and 2030.

The Macdonald warehouse conversion project in the 19th arrondissement of Paris is a shining example of how 1,100 housing units can be built within existing constraints, including complex foundations and a tramline. Another remarkable project is the future headquarters of the judiciary police regional directorate, which was built by VINCI in the new Clichy-Batignolles district in the capital’s 17th arrondissement. VINCI Energies’ service sector teams are responsible for setting up electricity, lighting, air conditioning and ventilation systems in the new stations, before forecourts, new urban amenities, public lighting, charging points and video surveillance systems are added outside.

Teams’ complementary areas of expertise to carry out the projects

VINCI teams’ extensive expertise enables the Group to bid on large projects that draw on its many talents. Let’s take a look back at the timeline. 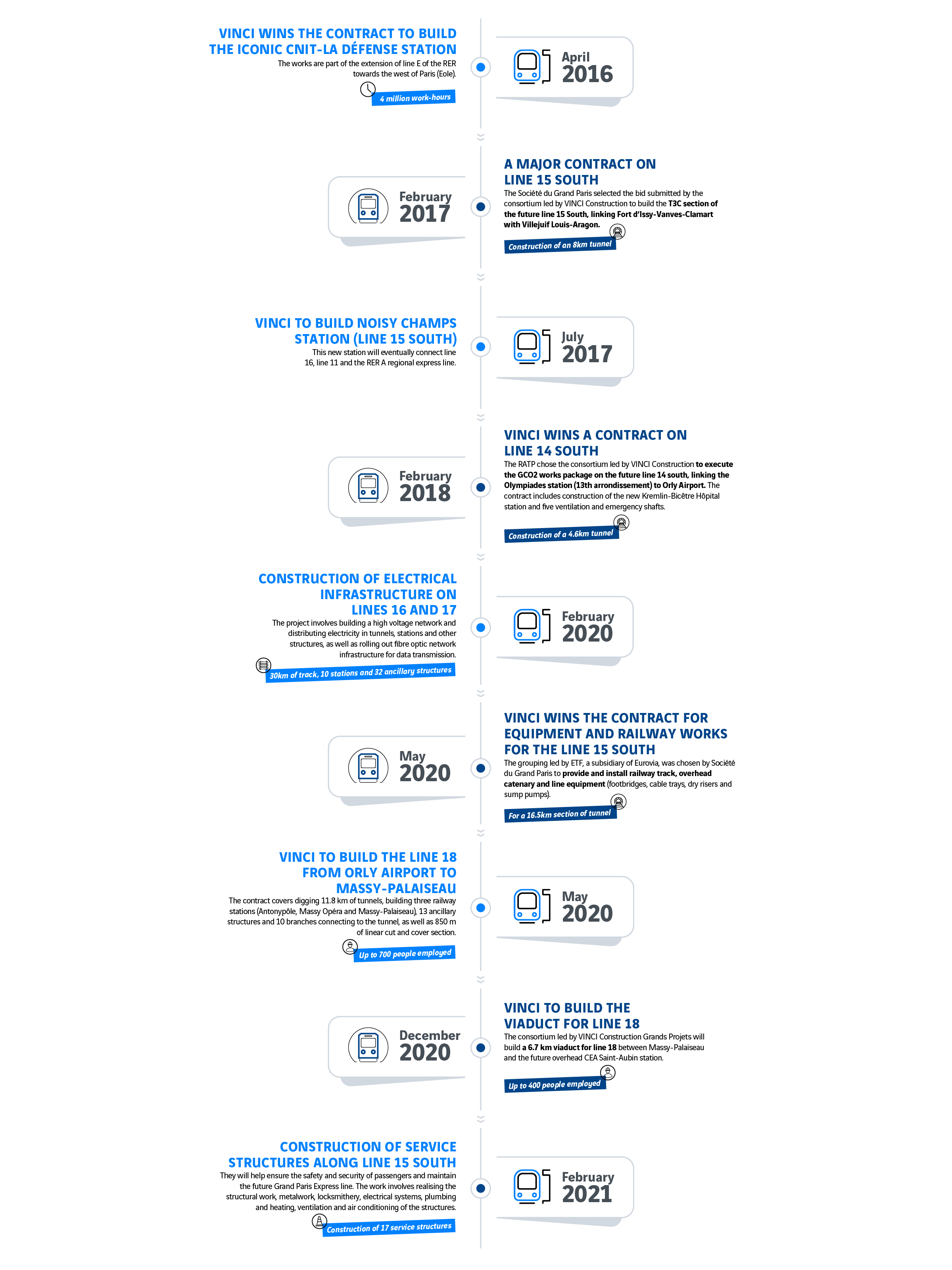 A project to invent the city of tomorrow

Rising to the challenge of staffing Grand Paris worksites