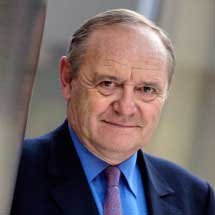 Vice-Chairman of the Board of Directors, VINCI

Background
Yves-Thibault de Silguy has a degree in law from the Université de Rennes, a master’s degree in public law, and is a graduate of the Institut d’Études Politiques de Paris, public service section, and the École Nationale d’Administration. From 1976 to 1981, he worked at the French Ministry of Foreign Affairs and for the European Commission from 1981 to 1985. He then worked at the French Embassy in Washington as a Counsellor (economic affairs) from 1985 to 1986. From 1986 to 1988, Mr de Silguy was an adviser in the Prime Minister’s office with responsibility for European affairs and international economic and financial affairs. From 1988 to 1993, he headed the international affairs department of the Usinor Sacilor Group, before being named its Director for International Affairs. From 1993 to 1995, he was Secretary-General of the Interdepartmental Committee for Questions of Economic Cooperation in Europe and, at the same time, adviser for European affairs and vice-sherpa in the Prime Minister’s office, assisting in the preparation of summits of the industrialised nations. From 1995 to 1999, Mr de Silguy was European Commissioner responsible for economic, monetary and financial affairs. From 2000 to 2005, he was Chairman of Medef’s European Policy Committee. In January 2000, he became a member of the Executive Board of Suez Lyonnaise des Eaux, then served as Chief Executive Officer of Suez from 2001 to 2003. He was then Executive Vice-President of Suez from 2003 until June 2006. Mr de Silguy was appointed Chairman of the Board of Directors of VINCI on 1 June 2006 and resigned from all his appointments at Suez. On 6 May 2010, he was appointed Vice-Chairman of VINCI and Lead Director of the Board. Since October 2018, he has been Vice-Chairman of VINCI.