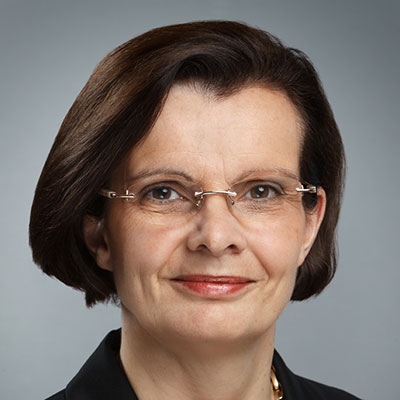 Senior Executive Vice-President, International Development, Thales; Member of both the Remuneration Committee and the Strategy and CSR Committee

Outside the VINCI Group in listed companies
Appointments and other positions held at 31/12/2021
- Senior Executive Vice-President, International Development of Thales and member of its Executive Committee
- Director of Renault and Chairman of its Audit, Risks and Compliance Committee

Appointments and other positions that have expired during the last five financial years
- Director of Areva SA, member of its Audit and Ethics Committee and Chairman of its End-of-Cycle Obligations Monitoring Committee

Appointments and other positions that have expired during the last five financial years
- Chairman of the Advisory Board of Télécom ParisTech.
- Member of the Governing Board of the French National Frequencies Agency (ANFR).

Background
Pascale Sourisse is a graduate of the École Polytechnique and Télécom ParisTech. She worked as an engineer at Compagnie Générale des Eaux from 1984 to 1985, as an engineer in the telecommunications division of Jeumont-Schneider from 1985 to 1986, and as head of the enterprise network division at France Telecom from 1987 to 1990. From 1990 to 1994, Mrs Sourisse worked in the French Ministry for Industry as assistant deputy manager, then deputy manager of the Consumer Electronics and Audiovisual Communication department. She then joined the Alcatel Group, where she held the positions of Director, Planning and Strategy from 1995 to 1997, Chairman and Chief Executive Officer of Skybridge from 1997 to 2001, and Chief Executive Officer and then President and Chief Executive Officer of Alcatel Space from 2001 to 2005. She was President of Alcatel Alenia Space (now Thales Alenia Space) from 2005 to 2008. Since April 2007, she has been a member of the Executive Committee of Thales. From May 2008 until early 2010, Mrs Sourisse was Chief Executive Officer of Thales’ Land & Joint Systems Division. In early 2010, she was named Chief Executive Officer, then Senior Vice-President for Defence & Security C4I Systems at Thales. Since early 2013, she has served as Senior Vice-President for International Development at Thales.