Everyone has an opinion but who knows exactly what a PPP is? 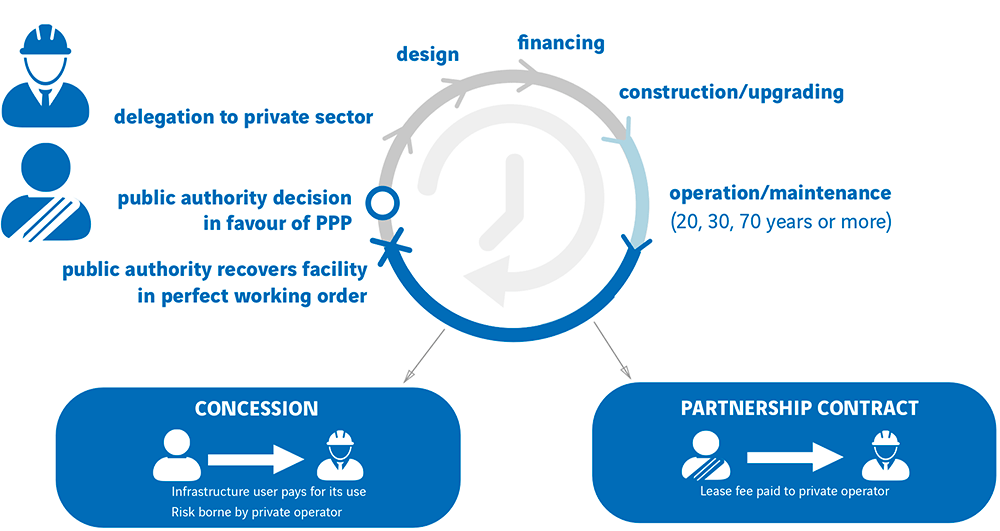 What is a PPP?

A PPP or public-private partnership is an all-encompassing long-term contract between a public authority (central or local government, public entity) and a private partner, who will design, finance and build (or upgrade) the object of the concession (infrastructure or facility such as a building, stadium, road, bridge, rail line or airport needed for public service) and then operate and maintain it, often for 20, 30 or even 70 years.

At the end of the contract, the infrastructure or facility is returned to the public authority.

“PPP” covers several types of contract, but there are two main categories in France:

Concession: the public authority – the grantor – assigns responsibility for designing, financing, building (or upgrading) and operating the object of the concession (infrastructure or facility) to the private operator – the concessionaire – at that operator’s own risk. Under this model, the private partner bears the commercial risk(generally known as “traffic risk”) associated with the use of the infrastructure or facility, and the infrastructure user pays for its use (the “user pays” principle). If there is a drop in the number of users, the concessionaire bears the shortfall.

Examples: the motorway network under concession in France or the Stade de France stadium near Paris.

Examples: PPP for public lighting and video surveillance for the city of Rouen, Jean Jaurès University in Toulouse, the Allianz Riviera Stadium in Nice or the Matmut Atlantique Stadium in Bordeaux, the PPP for the dams along the Aisne and Meuse Rivers.

The public-private partnership, whether in the form of a concession or partnership contract, is not the appropriate contractual solution for all projects, but sometimes it’s an excellent solution!

The PPP: one of several tools available to local government authorities

Without PPPs, numerous useful projects would not have seen the light of day, or only much later.

The concession or partnership contract approach may be efficient and relevant in some cases but not necessarily all. In the past, partnership contracts in particular have been poorly implemented, putting the whole economic balance of some projects at risk. It is up to public authorities to consider which contractual model is relevant based on the characteristics of the project. The PPP is just one of several tools available to them.

The PPP: one several tools available to public authorities

The PPP: a proven contract model that’s been around for a long time

The oldest version of PPP in France is the concession, which appeared under the Ancien Régime. It enabled the country to build its first major public infrastructure, such as the Canal du Midi, and modernise the capital’s urban infrastructure under the Second Empire (the Paris metro, road network, sewers, public lighting, water mains, etc.). The model then spread to many other sectors, including local public services and transport infrastructure.

In 1993, France’s Sapin Law introduced the notion of “delegated public services”. The concession contract became more precisely framed in both national and European Union community law. A European directive on concessions, adopted in 2014, was transposed into French law in 2016. In addition, extensive case law has clarified the rules governing concessions, particularly since the early 20th century.

In 2004, along with several other European countries, France implemented a new tool, the partnership contract (“marché de partenariat”) which, covered by new legal texts, offers authorities an alternative to concession and conventional public procurement contracts.

The PPP, an old and framed tool

PPPs are at the heart of our daily lives

PPPs are at the heart of our daily lives: roads, stadiums, high-speed rail lines, airports and so on.

Thanks to the PPP model, Bordeaux will soon be within two hours of Paris by high-speed train, the 1998 World Cup and UEFA Euro 2016 were able to be played in France, and Paris rediscovered its world-renowned emblem: the Eiffel Tower.

Without PPPs, numerous useful projects would not have seen the light of day, or only much later.